For this unit, required state standards include:

Historical Knowledge 7.1. Describe and compare the beliefs, the spread, and the influence of religions throughout Europe, Asia, and Africa, Islam, Crusades, Holy Roman Empire.

Historical Thinking 7.12. Compare and analyze human characteristics (e.g., population, land use, language, and religion) of places and regions in the Eastern Hemisphere.

From the Oregon Department of Education:   “It is essential that these standards be addressed in contexts that promote Social Science Analysis, civic responsibility, understanding global relationships, enhanced communication, making connections between the past, present and future, and the ability to evaluate historical and contemporary issues.”

CHAPTER 11 CAN BE FOUND BY CLICKING HERE

YOU WILL HAVE TO FILL IN 15 COUNTRIES AND/OR BODIES OF WATER ON THE TEST. NO WORD BANK! :) 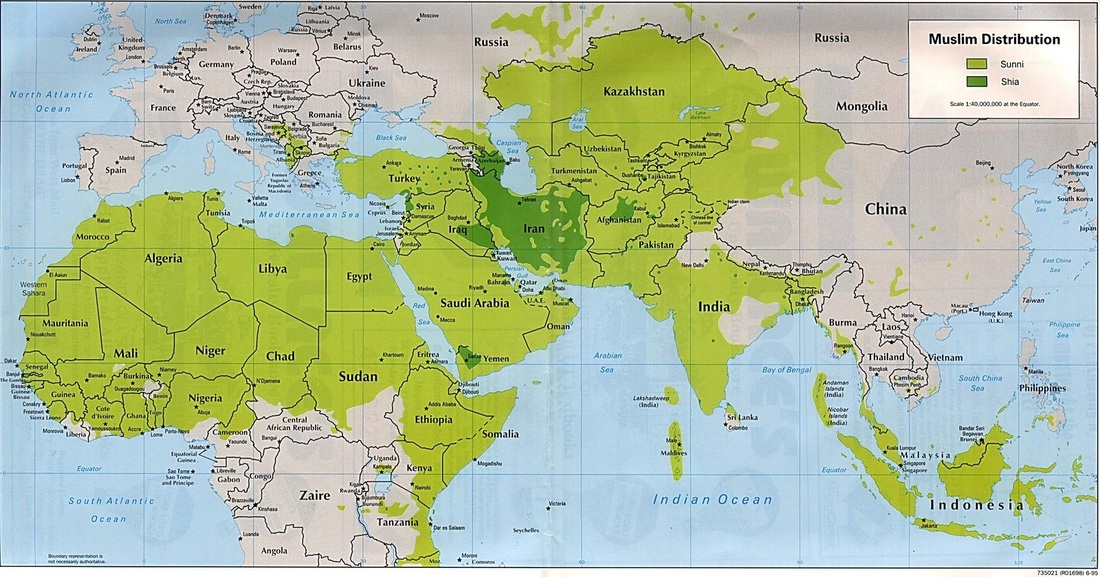 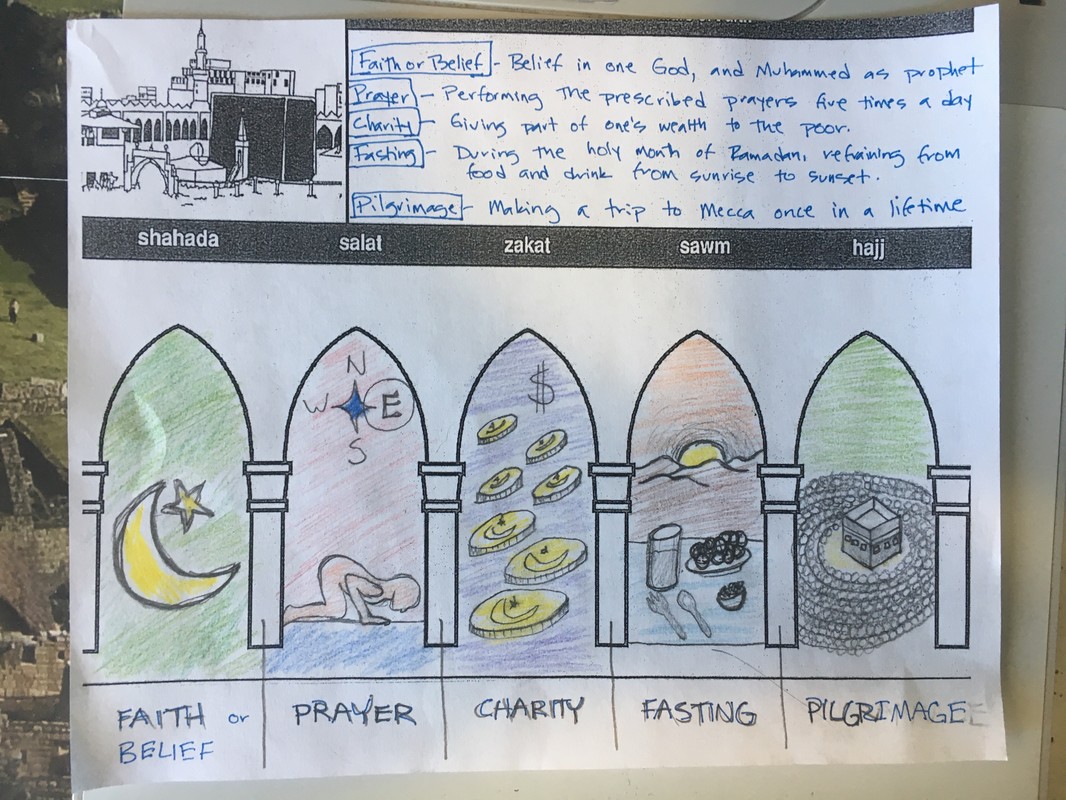 HERE IS OUR SLIDESHOW ON IMPORTANT CONTRIBUTIONS AND ACCOMPLISHMENTS OF MEDIEVAL ISLAMIC CIVILIZATIONS
On the test, you will have to choose three to discuss as most important. 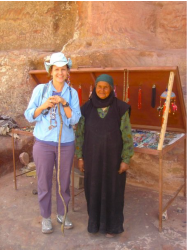 BASIC BACKGROUND TO THE FOUNDING AND SPREAD OF ISLAM

​Islam was founded by Muhammad (c. 570-632 CE), a merchant from the city of Mecca, now in modern-day Saudi Arabia. Mecca was a well-established trading city. The Kaaba (in Mecca)is the focus of pilgrimage for Muslims. The Qu’ran, the holy book of Islam, provides very little detail about Muhammad’s life; however, the hadiths, or sayings of the Prophet, which were largely complied in the centuries following Muhammad’s death, provide a larger narrative for the events in his life.
Muhammad was born in 570 CE in Mecca, and his early life was unremarkable. He married a wealthy widow named Khadija. Around 610 CE, Muhammad had his first religious experience, where he was instructed to recite by the Angel Gabriel. After a period of introspection and self-doubt, Muhammad accepted his role as God’s prophet and began to preach word of the one God, or Allah in Arabic. His first convert was his wife.

Muhammad's divine recitations form the Qu’ran; unlike the Bible or Hindu epics, it lacks a coherent narrative structure, but rather it is organized into verses, known as the suras. During one of his many visions, in 621 CE, Muhammad was taken on the famous Night Journey by the Angel Gabriel,  travelling from Mecca to the farthest mosque in Jerusalem, from where he ascended into heaven. The site of his ascension is believed to be the stone around which the Dome of the Rock was built.
Eventually in 622, Muhammad and his followers fled Mecca for to the city of Yathrib, which is known as Medina today, where his community was welcomed. This event is known as the hijra, or emigration. 622, the year of the hijra (A.H.), marks the beginning of the Muslim calendar, which is still in use today.

Between 625-630 CE, there were a series of battles fought between the Meccans and Muhammad and the new Muslim community. Eventually, Muhammad was victorious and reentered Mecca in 630.

One of Muhammad's first actions was to purge the Kaaba of all of its idols (before this, the Kaaba was a major site of pilgrimage for the polytheistic religious traditions of the Arabian Peninsula and contained numerous idols of pagan gods). The Kaaba is believed to have been built by Abraham (or Ibrahim as he is known in Arabic) and his son, Ishmael. The Arabs claim descent from Ishmael, the son of Abraham and Hagar. The Kaaba then became the most important center for pilgrimage in Islam.
In 632, Muhammad died in Medina. Muslims believe that he was the final in a line of prophets, which included Moses, Abraham, and Jesus. After Muhammad's Death The century following Muhammad’s death was dominated by military conquest and expansion. Muhammad was succeeded by the four “rightly-guided” Caliphs (khalifa or successor in Arabic): Abu Bakr (632-34 CE), Umar (634-44 CE), Uthman (644-56 CE), and Ali (656-661 CE). The Qu’ran is believed to have been codified during Uthman’s reign. The final caliph, Ali, was married to Fatima, Muhammad’s daughter and was murdered in 661. The death of Ali is a very important event; his followers, who believed that he should have succeeded Muhammad directly, became known as the Shi’a, meaning the followers of Ali. Today, the Shi’ite community is composed of several different branches, and there are large Shia populations in Iran, Iraq, and Bahrain. The Sunnis, who do not hold that Ali should have directly succeed Muhammad, compose the largest branch of Islam; their adherents can be found across North Africa, the Middle East, as well as in Asia and Europe.

During the seventh and early eighth centuries, the Arab armies conquered large swaths of territory in the Middle East, North Africa, the Iberian Peninsula, and Central Asia, despite on-going civil wars in Arabia and the Middle East. Eventually, the Umayyad Dynasty emerged as the rulers, with Abd al-Malik completing the Dome of the Rock, one of the earliest surviving Islamic monuments, in 691/2 CE. The Umayyads reigned until 649 CE, when they were overthrown, and the Abbasid Dynasty assumed the Caliphate and ruled large sections of the Islamic world. However, with the Abbasid Revolution, no one ruler would ever again control all of the Islamic lands.

HELPFUL LINKS   (if it's green, click it!)
Video on Ramadan lanterns in Cairo.

Video on the Hajj in Mecca.


Take this quiz and see how much you know!

How much of the world is Muslim?   Did you know one out of every seven people is Muslim?   Take a look at this map.

A timeline to Middle East history.